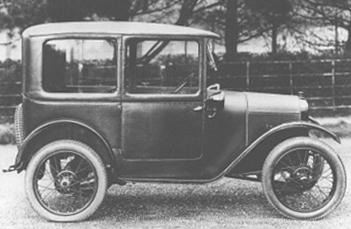 We saw here all the variations of the RF we can now identify, which began with this picture.

Dave Martin believes that this must be a 1927 car, as Wyatt notes in his book. Bob Wyatt knew the Longbridge photographer, Ron Beech, and had access to the Works photos. I’m sure he would have been told the correct date the photo was taken. Also, it was taken at the junction of Brookhouse Rd and Shepley Rd, near Barnt Green, where most of the Works photos were taken. (See A7CA mag 2015D)
So we can be as sure as we can be that it is a Longbridge-bodied car, not a Gordon England – which was the first Austin 7 fabric saloon here – built from 1926 under contract to Austin and to which our RF bears no resemblance.
Interpreting the evidence
Looking at the evidence within the Factory Index cards on front wings, they list under ‘1924’ June A1-4771 to A6 9329, ‘Types C and D’ and ‘R saloons’. Clearly, R saloons were not introduced in June 1924, so it must mean that the R saloon was introduced sometime between June 1924 (when Type C Tourers first used these wings) and August 1928. Which we know. Similarly, on the rear wing card for February 1926, A2 7074 to A6 9329, when the AD Tourer, R saloon and RF fabric saloon are listed, it means they were introduced on those cars BETWEEN February 1926 and August 1928.
So how can you help?
There must be an advert from Austin’s somewhere that introduces their “new Fabric saloon”. It’s just a matter of finding it, but it will narrow down the date of introduction.
We know that the R saloon was introduced in May 1926, chassis 20032, car A3-137. This information comes from the handwritten “Change Register” that was given to Bob Wyatt from Longbridge in January 1965, a copy of which is in the Association archive.
The Longbridge-bodied fabric saloon MAY have been first produced either late 1926 or even into 1927. Contemporary Austin adverts for models could probably narrow the date more exactly so we need to find an advert from the likes of Light Car and The Autocar magazines from these dates.
Get searching and let us know what you find! Of course, if you find an extant 1926/7 car somewhere which resembles this one above, then that will be even more exciting.